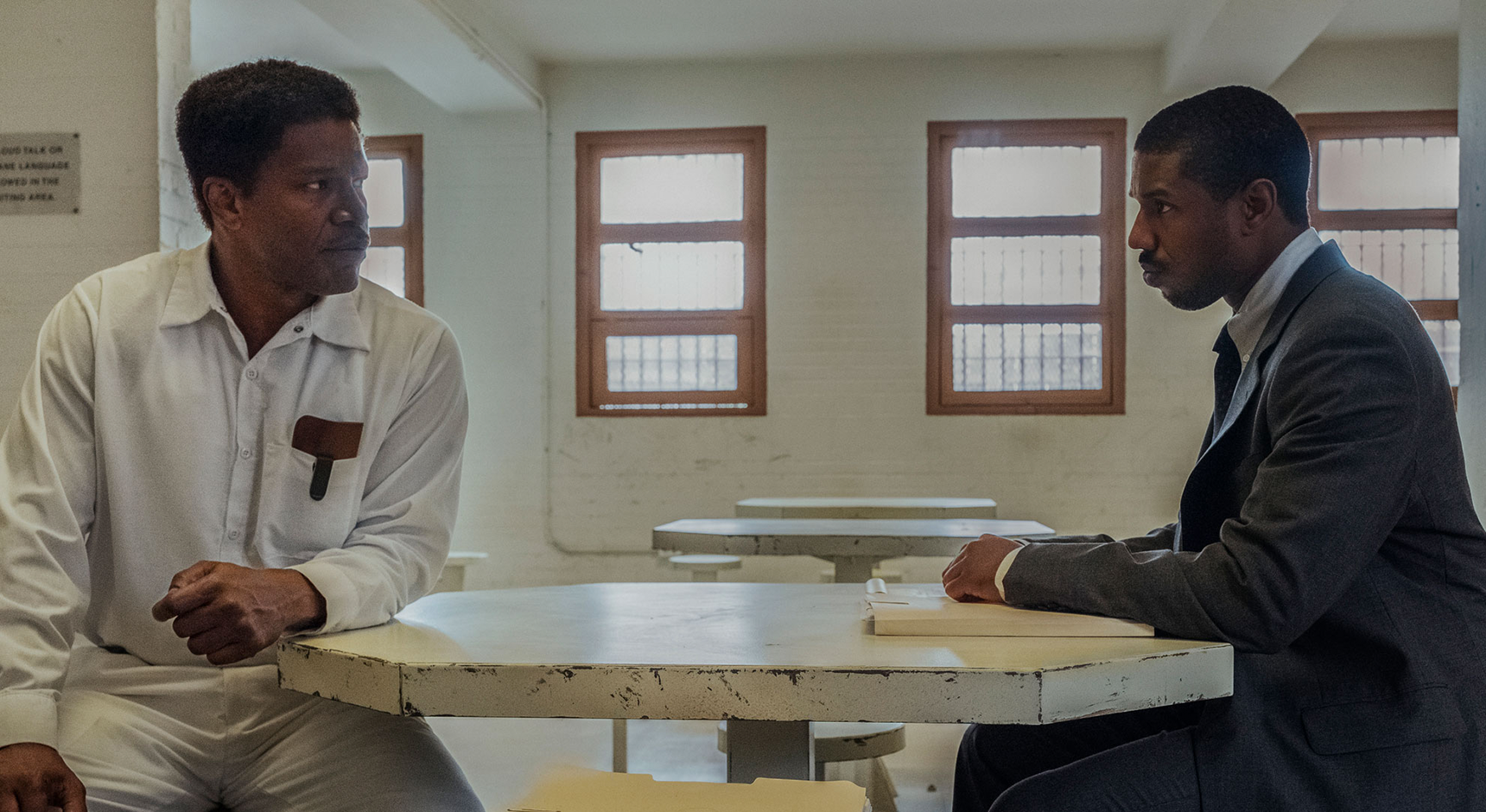 Jamie Foxx and Michael B. Jordan star in Just Mercy, a movie that chronicles the early life of Bryan Stevenson, founder of the Equal Justice Initiative, as he works to defend those wrongly condemned by a system plagued by racism that often leads to unjust outcomes.
Blog
By Alissa Black

Changing the conversation about criminal justice

"Narratives are messy. Nonlinear, emotional and contradictory, they often resonate with visceral meaning, feel authentic and ring true, regardless of their relationship to facts and evidence. They provide us with frames of reference that determine how we comprehend complex realities and define the important boundaries between what we imagine to be possible, probable or practical. They facilitate interpretation of the past, understanding of the present, and a vision for the future.

They can swing juries and elections.

They can fill prisons. But they can also fill the streets." – Jee Kim, Liz Hynes & Nima Shirazi, May 2017

The American criminal justice system is broken. There are a number of causes, a major one being the historical and systemic racism that has led to unjust policies and practices. Our work on civic empowerment in the United States is focused on improving foundational government services and policies that disproportionally impact historically marginalized communities, and the criminal justice system is among the most problematic.

Over the past several years, Luminate’s U.S. team has supported a number of organizations and companies working to make the criminal justice system more equitable through building tech to auto-expunge criminal records, gathering public perception data to assess levels of community trust in local police departments, publishing research on local governments’ undisclosed use of facial recognition technology, and capturing critical information about interactions with police officers.

We recognize that to fully engage in criminal justice reform we also need to invest in storytelling and narrative change because stories create empathy across difference, meaning out of disconnected data, and canvases that compel us to reconsider our perspectives.

Just Mercy, a major motion picture to be released widely in December 2019, starring Michael B. Jordan, Brie Larson, and Jamie Foxx, chronicles the early life of Bryan Stevenson, founder of the Equal Justice Initiative, as he works to defend those wrongly condemned by a system plagued by racism that often leads to unjust outcomes. It’s a story we believe needs to be told, and one that is grounded in the values of redemption, forgiveness, grace, and the possibility of a second chance. Films like Just Mercy provide opportunities to reimagine systems, beliefs, and new futures for our country.

We invested in the Represent Justice campaign, an impact campaign that will use the momentum generated by the film’s incredibly compelling story to open hearts and minds, and to change the conversation about criminal justice in the United States. Through the campaign, and in collaboration with non-profit partners, the messages of redemption and second chances will be lifted up by faith leaders in prayer circles; curriculum on racial bias will be delivered to groups who interact with the criminal justice system in different ways; arts and cultural events will celebrate the humanity of currently and formerly incarcerated individuals; Hollywood stars and performers will use their platforms to create space for criminal justice reform conversations with policy makers; and businesses will pledge to various methods of eliminating discrimination that many formerly incarcerated people face when applying for jobs.

In the same way that The Help sparked some Americans to acknowledge the humanity of domestic workers, we believe Just Mercy and the Represent Justice campaign will cause us to reckon with racial bias in the criminal justice system and the impact of mass incarceration

Stories that sit with us and make us think differently have the power to build empathy and community, align goals, and spur action. We are hopeful that shifting narratives about people involved in the criminal justice system will increase empathy and open up the necessary cultural and political space for meaningful reforms at the local level to reduce bias and unfair application of the law within the United States’ criminal justice system.