All articles
Blog
By Amira El-Sayed

In 2018, we took the strategic decision to make a substantive shift from ‘Civic Tech’ to ‘Civic Empowerment’. We broadened the frame of this impact area to acknowledge that technologies in and of themselves are insufficient to create lasting change, and that they must be coupled with organising strategies, as well as with capacity building and process improvements, to help communities learn to engage government, and to help government learn to use technology effectively. Our objective was, and still is, to enable all people to actively participate in governance, receive the services they need, and hold government accountable.

In 2020, we decided to build on this evolution to be more explicit about the outcomes we seek, and the underlying systemic problems we are keen to address. Based on this process, we developed an updated framing of our work which focuses on removing barriers to meaningful participation in society by all, especially those who are marginalised and underserved. The new framework is broad by design to create room for regional and contextual interpretation.

Our understanding of Civic Empowerment

Too many people worldwide are systematically and historically excluded from participating in society because of their identities, their socio-economic status, their citizenship status, or a combination of various oppressions, and they face significant barriers to participation in society, politics, governance, and economics.

The exclusion of people does not happen in a vacuum – it is caused and exacerbated by unjust, asymmetrical power structures. And so at the heart of Civic Empowerment are questions of power, equity, and inclusion.

The ambition of Luminate's Civic Empowerment work is to reduce barriers to full participation by all. We aim to address the following four barriers:

Luminate has long recognised the importance of effective public services for just and fair societies and will continue to support work that advocates for and facilitates equitable access to public services, with a focus on marginalised and underserved communities.

2. Marginalised groups face discrimination, which creates obstacles to full participation in society
Around the globe, people are excluded from participating in society based on who they are. Members of ethnic and religious minorities, LGBTQ+ communities, refugees and migrants, and indigenous peoples are some of the groups who are not always able to exercise agency over their lives.

For these groups, a critical step towards civic empowerment is the defence of their full and active participation in society. Luminate will therefore support work that centres the rights of people who face structural discrimination and exclusion.

Our work in this area will be driven by, and centre, the needs of those who face marginalisation.

3. Inclusive participation and dissent are under threat
A crucial part of civic empowerment lies in the ability to participate in public processes and governance, but also in the freedom to challenge and oppose these processes, or dissent with a government or regime.

However, spaces and fora for participation and dissent are increasingly threatened, to consolidate power in governments and other institutions, to disempower civic actors, and to restrict the expression of dissent by individuals and civil society organisations.

We will also support the fostering and protection of activists and social movements who are critical when it comes to social change, and we are keen to learn lessons that will help social movements build the bridge between political disruption, momentum, and lasting and positive reform.

As deeply entrenched structural power asymmetries are a main driver of civic dis-empowerment, Luminate’s Civic Empowerment work will also seek to challenge and shift unjust power structures to achieve the goals mentioned above. The question of power and equity thus becomes both a goal we are seeking to achieve as well as a lens through which we regard the work that focuses on services, marginalisation, and participation and dissent.

To Luminate, civic empowerment means removing the barriers to active participation in society. We work to improve equitable access to effective public services, defend marginalised groups, and protect inclusive participation and dissent. Structural inequalities cause injustice and marginalisation, so our work also seeks to challenge and shift unjust power structures to achieve the goals mentioned above.

Our shift to achieving Civic Empowerment by tackling barriers to full and meaningful participation is summarised in the graphic below.

The framework visualises the three strategic focus areas for Civic Empowerment, which are equitable access to public services, the defence of marginalised groups, and inclusive civic participation and dissent, organised around the central principle of shifting unjust power structures. 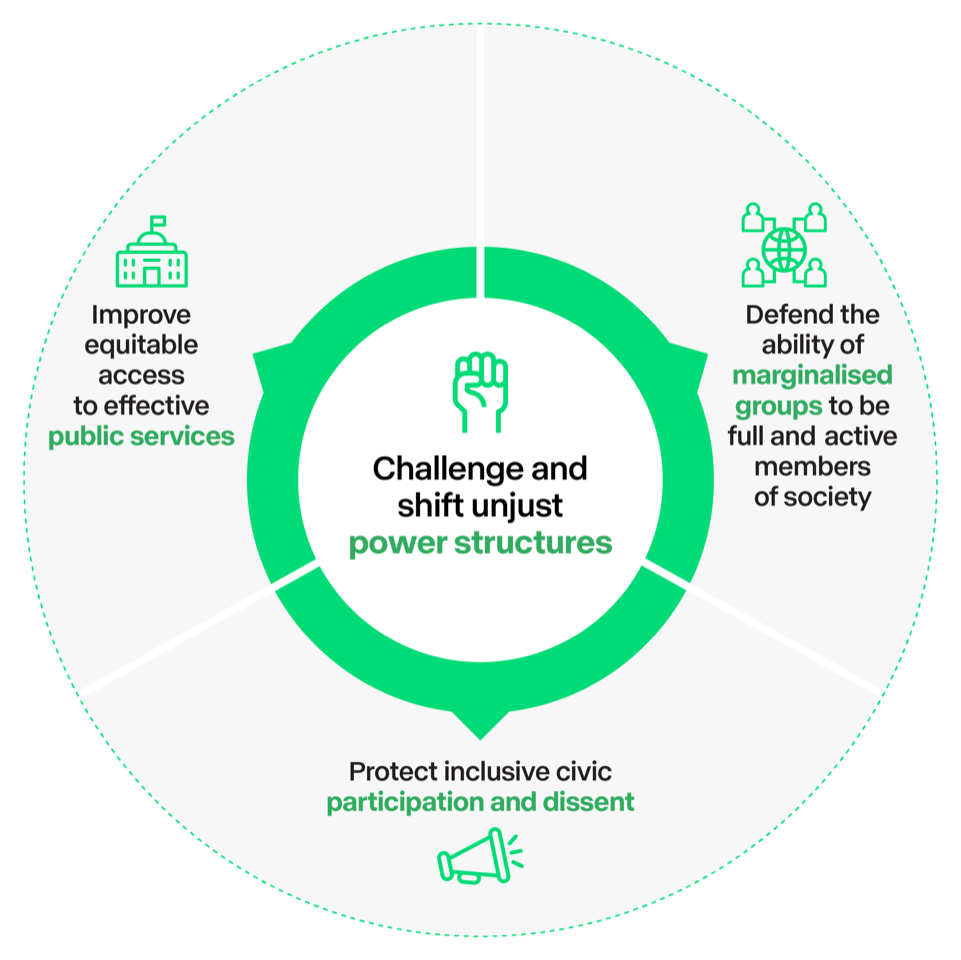 Through this evolved framing, we hope to be able to support Civic Empowerment in a holistic way – being mindful and respectful of the various and intersectional ways in which oppression and exclusion take place and playing our part to challenge deep and systematic power imbalances.

We believe that focusing on these priorities will contribute to achieving more just and fair societies, and we look forward to learning from current and future partners about how we can support the most impactful work.

In the last decade, our team has built a large Civic Empowerment portfolio of partner organisations, from Code for America and mySociety, to Nossas and amandla.mobi. Until last year, all of Luminate’s Civic Empowerment grants and investments were made at the regional and national levels, where we deployed over $150m to 105 organisations across 18 countries.

These recent grants are representative of our updated Civic Empowerment framework:

Human Dignity Trust works in countries spanning all regions of the world with LGBT activists, lawyers, parliamentarians, and government officials, to challenge or reform discriminatory laws that often date back to the colonial era. We provided support to the Human Dignity Trust to work towards the decriminalisation of LGBT people through strategic litigation and legislative reform.
Find out more
Asylum Access transforms discriminatory laws and policies into frameworks that enable refugees to live safely, move freely, and work legally to encourage their full social and economic participation. We contributed to Asylum Access' Global Systems Change work which seeks to transform the refugee system into one that is led and influenced by refugees and host communities, and that prioritises efforts that defend fundamental rights and secure access to services.
Find out more
Global internet freedom is a critical element of Civic Empowerment. Civil society, activists, and social movements use the internet to communicate, collaborate, share knowledge, and organise. Luminate founded the Internet Freedom Support Fund with the Ford Foundation to help ensure the internet's freedom, openness, accessibility, and privacy in order to reduce threats to meaningful participation and dissent occurring online and across the globe.
Find out more
The Fund for Global Human Rights works with locally rooted organisations in more than 20 countries, with a focus on those experiencing high rates of poverty, recovering from war, or building democratic governments. Luminate contributes to the Fund’s work in supporting grassroots organisations working across the globe to enable activists to remain agile in the face of crackdowns on their work.
Find out more