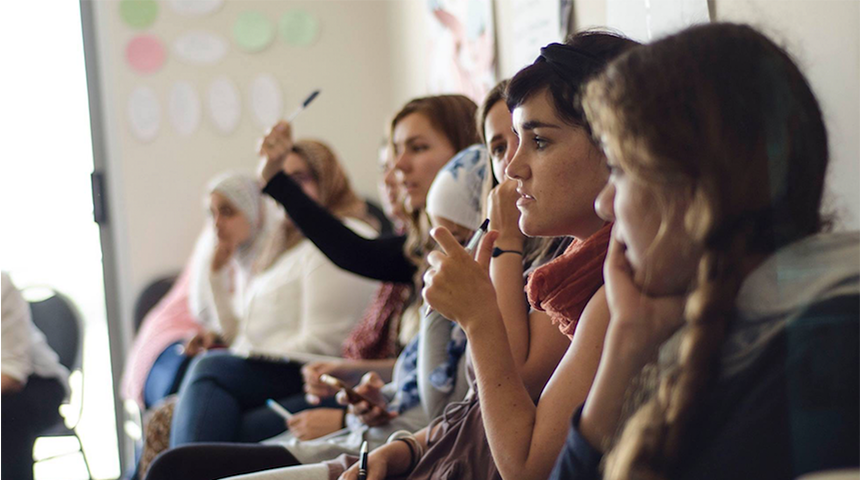 Why we invested: The IWMF

Press freedom is increasingly under threat around the world. Women journalists are particularly vulnerable, facing severe threats to physical and mental safety and privacy both offline and online. Every day, female journalists are killed, assaulted, threatened, harassed, and defamed. Additionally, sexual harassment in the media industry has long been a problem, and in today’s challenging environment online, attacks aimed at women reporters are growing. These issues can result in women declining assignments or leaving the industry altogether. As Anne Helen Petersen writes in her Columbia Journalism Review special report The Cost of Reporting While Female (2018): “Most of it [abuse] arrives online—through Twitter, via personal Facebook messages, on Instagram, through email exchanges, and sometimes even in our parents’ inboxes. When ignored, these threats can sharpen and multiply. What begins as displeasure with a piece can escalate to confrontations that are chilling in their cruelty. Abuse and menace have become a way of life for women in journalism. But like so many things in women’s lives, the labour of confronting that menace is largely invisible.”

At Luminate, through the work of our portfolio, we have also seen a number of examples of women journalists facing cyber-harassment that often escalates into violence. The Association of Media Women in Kenya for example, recently found that seven out of 10 Kenyan female journalists report facing online harassment in their work. We witness similar challenges in sustained cyberattacks that often translate into escalating physical threats on female journalists in our portfolio.

A recent study by the International Women’s Media Foundation (IWMF) quantified the scope and impact of online harassment of female journalists. The study, entitled Attacks and Harassment: The Impact on Female Journalists and Their Work, was featured in a recent Reuters article - ‘I will rape you’: female journalists face ‘relentless’ abuse. It revealed that nearly two thirds of women journalists surveyed said they had been subjected to online harassment or threats, with more than one in 10 reporting it happened often or daily. Journalists reported adopting self defence mechanisms to minimise the assaults they face online. Their main mode of defence is self-censorship - changing the way they write or avoiding certain stories altogether, selecting their clothing to minimise negative feedback when they appear on camera, or minimising their footprint on social media to the extent that they are able. However, they cannot change who they are and two-thirds of early-career female journalists are considering leaving the profession all together, unwilling to put up with relentless abuse as a daily part of their job, impacting representation in a sector that is already notoriously un-diverse.

The IWMF - founded in 1989 and based in Washington, D.C. - is one organisation seeking to elevate the voices and status of female journalists globally in news media. It hosts a range of programmes targeted at helping women journalists develop practical solutions to the obstacles faced in their careers and lives. The IWMF’s vision is for women journalists worldwide to be fully supported, protected, recognised, and rewarded for their vital contributions at all levels of the news media. It believes that, as a result, consumers will increase their demand for news with a diversity of voices, stories, and perspectives as a cornerstone of democracy and free expression.

To support this work, Luminate is pleased to award the IWMF an early-stage grant of $350,000 to specifically expand its ‘safety’ work, which provides much-needed preventive and reactive training alongside hands-on experience reporting in regions where safety can be an issue. As part of its safety work, the IWMF also commissions and conducts research on these issues; female journalists can also tap the IWMF’s Emergency Fund for help with legal and medical bills, equipment loss, injury, and asylum – a resource that gets a request every 72 hours.

Luminate’s grant will focus on digital security and combatting online harassment, which aligns closely with its strategy. The grant will support the creation and evaluation of a new ‘cyber-aid’ programme focused on preventing and countering harassment and promoting digital safety for female journalists. The IWMF aspires that building a holistic ecosystem of support for female journalists to effectively address online attacks allows for a greater diversity of voices in the news media, amplifying women's vital perspectives. Key target populations include:

Additionally, the funding will be leveraged to structure and conduct an evaluation of the pilot programme - with the intention of informing the field about preventive measures that work in enabling journalists to continue reporting post-threat.

We’re excited to see the impact the IWMF can have supporting female journalists around the world at all stages of their careers, and building on its proven track record. The organisation’s 2016-2017 impact report demonstrates clearly that IWMF is executing its vision offering both preventive and reactive care to build a specialised community within the sector. Its network now comprises more than 1,000 female journalists across 50 countries. Since 1990, its ‘Courage in Journalism Awards’ has honoured 114 journalists in 56 countries, recognising women in media – particularly women in non-Western context in media – for their achievements. Additionally, the organisation currently awards over 100 fellowships each year across multiple geographies – and receives more than 2,000 applications for these fellowships, indicating a high demanded and competitive process (~5% admission rate). The organisation produces critical, data-driven research on the state of women in media globally, making the organisation a crucial voice advocating for representation in the sector.