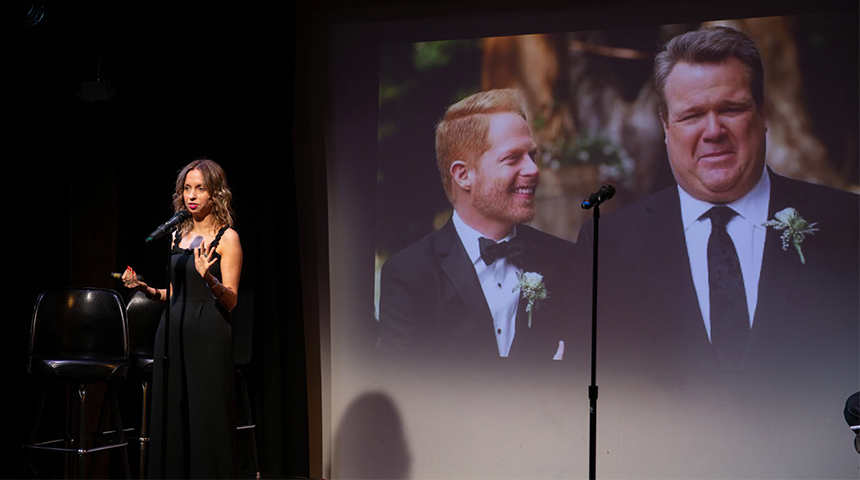 CMSI executive director Caty Borum Chattoo speaks about the research behind why comedy for social change works at the launch of the "Yes, And...Laughter Lab" in New York (Credit: Amir Hamza)
News

Why We Invested: Center for Media & Social Impact (CMSI)

Social justice groups and civil society organisations often face challenges in educating the broader public, specific target audiences, or other stakeholders about their work and the problems they are seeking to solve. There is a need for more creative and entertaining ways to nudge audiences into engagement with social change. The report 'Pop Culture Works for Social Change' recognises that entertainment, mass media, and the performing arts can drive change because they can shift perspectives, shape cultural narratives, and generate empathy.

Research has shown that comedy can be a means to highlight and raise awareness of serious issues, especially among audiences who may not engage with more austere narrative forms tackling the same issue. Shows by comedians such as Jon Stewart and Stephen Colbert have been cited as having increased the political efficacy of viewers. These shows attract large audiences; The Daily Show with Trevor Noah and The Late Show with Stephen Colbert have average audiences of 0.6 and 3.5 million, respectively. Research also suggests that the use of comedy in political commentary increases the likelihood of individuals, and especially young people, taking action – be it through participation, protests, or signing email petitions. For example, a 13-minute segment about net neutrality on John Oliver’s Last Week Tonight received over 8 million views within 10 months of being uploaded on YouTube. The segment is reported to have resulted in the Federal Communication Commission’s website crashing after viewers visited to offer comments on the pending proposal, and accounted for the majority of the four million comments on the document. Similarly, nonfiction comedy narratives such as Stand Up Planet have been found to have significantly higher gains in audience engagement with global poverty compared to the more somber documentary, The End Game. If channeled appropriately, comedy can help social justice organisations amplify their impact.

The Center for Media & Social Impact, directed by Caty Borum Chattoo, was originally founded in 2001 as the Center for Social Media. It was re-branded as the Center for Media & Social Impact in 2015 under Borum Chattoo's strategic direction. Based at American University’s School of Communication, CMSI is an innovation lab and research centre that creates, studies, and showcases media for social impact. Informed by research, it experiments with leveraging comedy for social change through two initiatives in particular: ‘Yes, And… Laughter Lab’ and ‘Comedy ThinkTanks’.

Comedy ThinkTanks is a creative initiative bringing together professional comedy writers and social justice groups (such as Color of Change and IllumiNative) to create comedy ideas. They collaborate during a week-long comedy writers’ room lab experience that results in new creative empowerment for civil society groups that endeavor to engage the public in dire challenges.

Through these initiatives, and other projects, the CMSI is playing a catalytic role in enabling the use of comedy for social change in a number of ways.

1. Creating a platform for comedic talent to produce powerful content and meaningfully engage with social issues.  It provides a space for those working in comedy to explore ways in which they can leverage their skills in addressing social challenges that they are passionate about.

2. Establishing networks and relationships to support the use of comedy for social justice. Many of the best comedy writers and performers want their work to have impact, but are often not in touch with the problems on the ground, and activists are unaware of the power of storytelling for their causes. CMSI’s innovative initiatives seek to address this. YALL aims to educate stakeholders – comedians, advocates, funders, and entertainment executives –  and offer ideas for collaboration in creation of impactful pop culture content. Similarly, Comedy Think Tanks brings together social justice organisations and comedians to develop ideas that can help tackle some of the social challenges faced today.

3. Developing a best practices tool-kit to facilitate successful collaborations between comedians and non-profits. CMSI is able to track the projects it launches and engage participants to understand the learnings, collaboration, and creative challenges of these two sectors working together, which can unearth best practices and recommendations for expanding this type of work in the future.

Luminate is providing a $500K grant, which will fund the next installments of the Yes And… Laughter Lab (YALL), and support Comedy ThinkTanks. The project grant offers CMSI the opportunity to put together four Yes, And... Laughter Lab convenings and six Comedy ThinkTanks over the period of the grant.