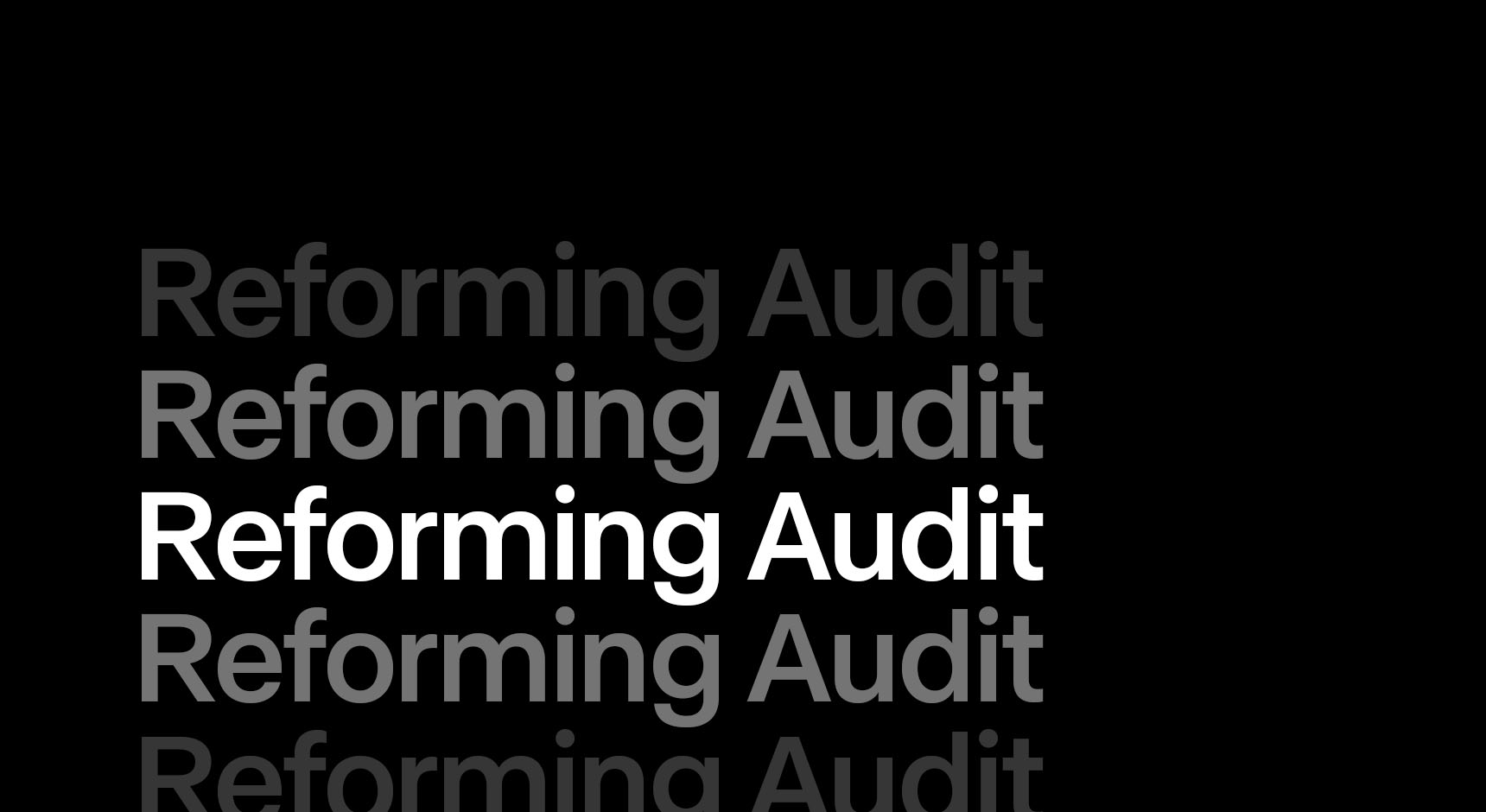 We welcome the publication of the Auditing with Accountability report, a collaborative research project by academics at the University of Sheffield (Adam Leaver) and Copenhagen Business School (Duncan Wigan, Saila Stausholm and Leonard Seabrooke), funded by Luminate and commissioned in collaboration with the Joffe Charitable Trust.

The report makes a strong case for reform of the audit industry. It also calls for a reaffirmation of the founding principles of audit: credibility, objectivity, and integrity around the scrutiny of financial accounts to increase stakeholder confidence. We support measures that would strengthen the independence of auditors and ensure that a wider public interest is served by audit alongside the needs of company shareholders.

Why focus on audit?

There is a real human cost when audit fails. Take the 2018 collapse of construction services company Carillion, the largest ever trading liquidation in the UK, which came shortly after a clean audit from KPMG. The collapse caused project shutdowns and delays in the UK and overseas, over 3,000 redundancies in Carillion alone, and major losses for the company’s 30,000 suppliers and 27,000 pensioners. It has been estimated that the collapse could cost UK taxpayers up to £180m.

The decisions made based on financial audits affect us all, through our pensions or savings, or as customers or suppliers of companies. Audits are crucial to the performance of the economy, and are also a vital contributor to the trust and confidence that is required in a modern economy. Failure in audit undermines public trust both in the companies being audited (and often delivering public services) and in the state institutions that should be regulating them.

Over the last few years, our partners have focused on financial transparency and accountability around public finances, especially where cross-border transactions and commercial interests intersect with the public sphere. For example, Transparency International UK and Global Witness have been campaigning for a register of property ownership in the UK to crack down on laundering corrupt money through buying property in the UK. In line with the anti-corruption community, we are increasingly turning our attention to professional intermediaries - lawyers, bankers, accountants, estate agents, and lobbyists.

All of the major professional services firms have been accused of facilitating a range of illegal and unethical practices including tax evasion, money-laundering, and state capture. Accountancy appears to have become compromised through increasing conflicts of interest in the firms who carry it out. A string of audit failures like Carillion suggest that audit practices for major institutions are not fit for purpose.

Why are the professional services firms failing in audit?

Audit of major international companies is dominated by the “Big Four” accounting firms: Deloitte, EY, KPMG, and PwC. This is in part a reflection of the complexity of auditing multinational companies and the need for an auditor with global reach and expertise - something that the Big Four can offer. However, a major concern about the performance of the Big Four - and some of their smaller competitors - is the conflict of interest presented by the wide range of services they provide. Following in the footsteps of Arthur Andersen, all of the big firms have diversified beyond audit into consulting services and major tax practices. In many instances, audit has been a foot in the door (even a “loss leader”) for these firms to secure highly profitable consulting contracts. This has led to justifiable scepticism as to the degree to which audit integrity has suffered as a consequence.

This report echoes the 2019 recommendations of the Brydon Review, an independent review commissioned by the UK Government into the quality and effectiveness of audit. Although there are moves within the Big Four to stop offering audit and consulting services to the same client, we agree that audit quality for complex multinational corporations is unlikely to significantly improve if it continues to play second fiddle to the much more lucrative consulting practices within these global firms. Therefore, we support this report’s conclusion that structural and legal separation of audit from consulting is necessary.

Conflict of interest is not the only problem. Auditors work within the parameters of internationally agreed accounting frameworks. The researchers raise questions about the viability of underlying accounting standards - the “fair value” accounting standards adopted in the US in the 1990s and in most of the world (through IFRS) in 2005. Fair value accounting has been blamed as the root cause of several major audit failures, such as Enron and Carillion. While it appears that a return to “historic cost” accounting would not be viable for financial institutions, there may be an argument for its re-application to non-financial institutions. Therefore we support a review of the broader purposes of accounting, including this report’s call for a government review of fair value accounting.

A return to healthy scepticism

While reform of accounting standards could strengthen audit practices, there is much that can be done within the current regime to improve audit quality. The report focuses on the concept of “opportunity spaces” for audit failure - the fertile conditions under which these failures can occur. A crucial finding is that management is given too much opportunity to create overly optimistic assessments of the financial viability of their companies. There are various reasons for this, including a client relationship between auditors and management that dis-incentivises auditors from challenging dubious financial practices (such as paying dividends that undermine capital maintenance) and over-optimistic valuation and income projections.

It also worth noting Sir Donald Brydon’s challenge to auditors to work harder to identify fraud in companies. His proposals include a requirement for auditors to act on their suspicions if they do not believe directors are being candid with information. We support the report’s call for reinvigorating a culture of scepticism and prudence in the audit process. A good first step would be revising the IFRS accounting framework to reflect the need for prudence in audit, as enshrined in the UK’s 2006 Companies Act.

Ultimately, this report demonstrates that there is an “accountability gap” around audit: the shortfall between what the wider public might legitimately expect auditors to do and what the audit process currently delivers. To narrow this gap several major changes would be required, including:

In terms of beefing up the regulators, a promising first step in the UK would be to implement the recommendations of the Kingman Review by replacing the Financial Reporting Council with the proposed Audit, Reporting and Governance Authority (ARGA). For this to be a meaningful step, the new body will require significantly stronger powers to penalise auditors for failure.

The report’s call for civil society representation in key regulatory bodies and reform processes is vital to ensure that audit regulation benefits from public interest perspectives as much as the requirements of shareholders. We look forward to working with civil society, industry and regulatory bodies to refine and deliver financial auditing that is accountable and fit for purpose.