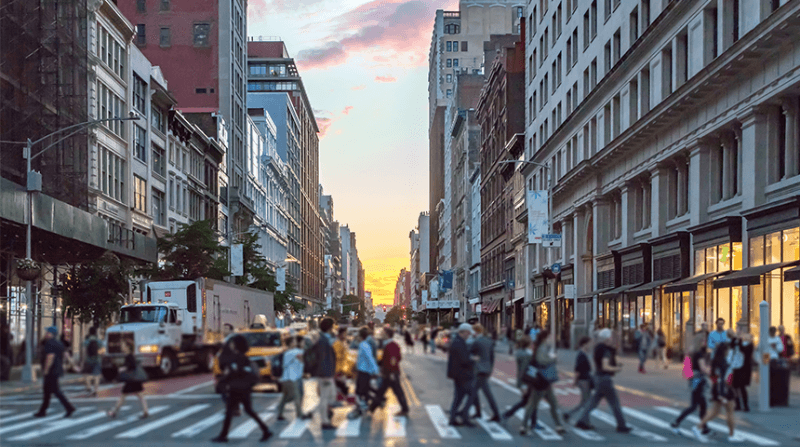 By Alissa Black and McKenzie Smith

Everywhere we look, technology pervades nearly all aspects of daily life. It’s in our homes, our offices and job sites, our cars, the stores where we shop, and other commercial spaces. As of 2018, smartphones claimed space in 77% of U.S. pockets or purses – meaning most of us now carry advanced technology with us everywhere we go. Yet one domain where technology has untapped potential is in the public sector and civic life. A trip to your local DMV, where you may take a paper ticket and forms to complete while waiting for over an hour, may underscore this point.

At Luminate, our approach is built on over 10 years’ experience supporting civic tech organizations that improve government service delivery and increase civic participation. Reflecting on that experience, we recently outlined a new strategy for civic empowerment informed by lessons learned from our global work in civic tech and macro trends that have transformed the environments in which we operate.

To further explore the local factors contributing to our global shift, the U.S. Luminate team turned to Dalberg, a global strategic advisory firm, in early 2018 to identify and analyze trends and lessons from the last decade of U.S. civic tech. We hope the findings will inform not only our work going forward, but also that of our partners and co-investors.

From tech optimism to tech realism

Over the last 10 years, civic tech in the U.S. has evolved through three distinct phases: from a period of early exuberance prior to 2008; to a focus on demonstrating and disseminating new models from 2008-2016; and most recently, a reevaluation of the role of technology in broader civic change. In the early years, growth was catalyzed by a belief in the transformative power of technology, the rise of low-cost cloud computing, and a favorable policy environment under the Obama administration - all of which piqued interest in civic tech from government, venture capitalists, and impact investors. Civic tech organizations began to flourish, and some even reached considerable scale—NextDoor, the neighborhood social networking site, became the first civic unicorn, reaching a $1.1 billion valuation in 2015; change.org reached 100 million users; and DoSomething.org reached six million members, offering a glimpse of the field's potential.

In the early years, growth was catalyzed by a belief in the transformative power of technology, the rise of low-cost cloud computing, and a favorable policy environment under the Obama administration.

In parallel, demand from both residents and government officials for civic tech has increased. Dalberg found that as of mid-2018, 23 cities had chief data officers, and 78 had staff dedicated to data. In our own portfolio, Code for America now has over 70 brigades across the country, and Fuse Corps has embedded 130+ executives in local governments for year-long fellowships, with 92% of government hosts requesting additional Fuse fellows in subsequent years.

Despite considerable progress, we're now seeing a reevaluation of the space driven by an erosion of trust in both government and technology, as highlighted by flashpoint events such as the 2016 U.S. election and the Cambridge Analytica scandal. Going forward, we must not only build innovative civic tech to strengthen democracy, we must also work to minimize the risk that existing technologies are used to weaken our democratic institutions.

The evolution of civic tech

As we enter the era of tech realism, we are nevertheless excited that 62% of Dalberg’s survey respondents believe civic tech has untapped potential. However, realizing that potential will require us to break down several common barriers that continue to slow the field’s growth:

Funding, especially early-stage risk capital, is scarce – less than one percent of all venture funding goes to the civic tech sector in the U.S.

Lessons from the past will inform our future

In addition to assessing the trends and challenges that defined the last decade of civic tech investing, Dalberg also highlighted lessons learned with important implications for the field going forward:

First, civic tech is a means, not an end. Civic technology has captured the attention of technologists, governments, and funders as an important way to improve civic life - and it has demonstrated its ability to deliver impact across several different use cases. Yet civic tech itself is a means, not an end. Unlocking its full potential therefore requires defining a clear problem and understanding the role technology can play in addressing it, often alongside other policy or process fixes. In our portfolio, Elucd measures resident sentiment on whether they feel safe in their neighborhoods and how much they trust local police to help city leaders improve performance over time. While technology has unlocked the ability to measure community sentiment, Elucd’s full impact is dependent upon police chiefs and other city leaders using these insights to inform decisions and to make changes to improve community trust over time.

Second, civic tech almost always interacts with political agendas, even if the technologists’ aims are apolitical. Initially, we believed we could pursue civic tech funding in a purely apolitical fashion. In our current environment however, politics are nearly impossible to avoid. For example, after taking office in 2017, the current Administration left over 70 positions vacant in the President’s Council of Advisors on Science and Technology (PCAST) and the Office of Science and Technology Policy (OSTP). Furthermore, service delivery improvement is inherently political when the nature of services themselves are dependent on policy decisions made in increasingly polarized environments (e.g., food assistance benefits). Where civic tech solutions do focus on politicized services, they often have the most success in local governments, where politics can be less divisive, and residents’ needs can overcome division.

Third, like many industries, civic tech has room to improve diversity, equity, and inclusion (DEI). This lesson is not called out explicitly in Dalberg’s research, but it was a common undercurrent in stakeholder interviews in which many pointed out how technology often amplifies the power of those who already hold it. It also reflects a growing focus on DEI across industries, from initiatives advancing diversity in tech and venture capital to those at work in Hollywood and many sectors in between. As a global organization, we are working to integrate considerations of diversity and inclusion across all aspects of our work – from the composition of our team, to our investment process and post-investment support. Looking ahead, the civic tech community must continue to learn from our past mistakes to ensure the societies we’re building reflect the priorities of all individuals and that everyone working in the field feels respected, valued, and safe.

While many of those interviewed believe civic tech has untapped potential, only 24% of survey respondents believe a shared vision exists for the field. At Luminate, we hope our vision for the work ahead can inform and complement that of our partners. Civic tech investing, as part of our Civic Empowerment focus, will continue to be a crucial pillar of our work in the U.S., and four guiding principles will inform this work going forward:

Make the most of watershed moments. The Dalberg retrospective highlighted that key flashpoints have shaped the development of the civic tech field. Despite invigorated interest in strengthening democratic institutions in the wake of the 2016 elections, concerns about the negative impacts of technology have intensified, and the civic tech field finds itself at yet another inflection point. As we look ahead to the future, we will continue to identify and leverage key moments in time to build momentum among community members, entrepreneurs, government officials, investors, and philanthropic funders.

Tech for civic empowerment. We understand, now more than ever, that technology alone is insufficient to enact the change we hope to see in the world. In the past, we assumed that new technology and efforts to digitize government would lead to improved services for residents. Reality, it turns out, is not so simple. Going forward, we’ll look for founders with a clear understanding of how their technology interacts with or facilitates changes to existing government processes and policies to increase the responsiveness of our institutions or empower individuals to participate.

Civic tech that elevates the underserved and strengthens democracy. When considering investments, we’ll focus on technology that builds a new civic equilibrium, rather than simply digitizing existing inequalities. This includes understanding how technology amplifies the voices of those who have traditionally been marginalized from civic life and prioritizing teams – like those of 2018 investees Raheem.ai and United We Dream – whose proximity to the issues they’re solving gives them unique perspectives on the solutions needed to advance civic empowerment. Similarly, we will place more scrutiny on the potential unintended consequences of technology and prioritize entrepreneurs working to mitigate the risk that their technology might be co-opted to weaken democratic institutions or compromise individuals’ data and digital rights. Finally, where protecting the rights of or enhancing services to underserved communities isn’t possible through bipartisan or politically neutral organizations, we’ll be bolder in our support for organizations aligned with Luminate’s values while avoiding support for any specific political party or candidate.

When considering investments, we’ll focus on technology that builds a new civic equilibrium, rather than simply digitizing existing inequalities.

We’re all in this together. As outlined in our global strategy, we will look for opportunities to increase our portfolio support to include organizational development and improve our investees’ ability to deliver their mission over time. This means working closely with our existing portfolio to identify areas where they might benefit from additional support—from executive coaching to impact evaluation to portfolio convenings or other opportunities to problem-solve around common challenges. We also look forward to building new connections with peer funders in this space, and those new to the field, to share our progress and find ways to enhance our collective impact.

As we integrate lessons from the last 10 years into our work going forward, we welcome ideas and feedback from others in the field. We are excited to unlock the full impact potential of civic tech as part of our broader effort to develop the civic empowerment infrastructure necessary to build more just and fair societies, and we hope to continue to share our learning along the way.

To dive deeper into Dalberg’s research, see a summary of their assessment here.