Luminate supports this action plan whose signatories include 11 Nobel laureates and over 90 expert individuals and organisations working on digital threats to democracy. The plan sets out recommendations to rein in the information crisis created by the major online platforms and to rebuild journalism for the 21st century.

The action plan comes at a critical moment as the EU attempts to regulate the world’s largest technology corporations through new laws such as the Digital Services Act (DSA) and the Digital Markets Act (DMA). But there are many enforcement challenges ahead, for which we will have to build the people power needed to ensure rights-respecting governments have the counterweight to the lobbying and legal might of some of the world’s wealthiest corporations.

But the harms of Big Tech’s business model are rampant globally. That’s why we support Maria Ressa and Dmitry Muratov’s call for tangible actions in Europe, and beyond, to make this vision a reality.

The key pillars of the action plan are:

Bring an end to the surveillance-for-profit business model

If people are given a meaningful choice, we would not choose to be surveilled. When Apple introduced changes enabling users to stop apps from collecting their data, 87% of users, in the first two weeks, blocked surveillance. Governments must adopt robust data protection laws so citizens’ fundamental rights are protected, and the EU must enforce its own data protection law, GDPR, starting by adequately resourcing its regulators. Equally, the powerful algorithms and design features that determine our information diet must be detoxed through new enforcement powers. Governments must not cave to pressure to create special carve-outs in new laws for powerful entities like media or politicians.

Global tech companies afford people unequal rights and protection depending on their users’ status, power, nationality, and language. Establishing transparency and accountability rules for major online platforms, as well as demanding independent human rights impact assessments, should become minimum standards before these tech giants are allowed to do business.

The Twitter whistleblower Peiter ‘Mudge’ Zatko’s documents about the company’s safety and security practices globally are damning. One of his leaked documents, now in the public domain, assessing the company’s security systems concludes: “it is not set up to deliver globally on trust and safety.” Luminate's support for Facebook whistleblower Frances Haugen enabled her to explain and draw attention to the structural racism built into how the platforms allocate resources to their global operations. As we’ve seen in places such as Ethiopia, Myanmar, the Philippines, and India, this has devastating offline consequences for which these companies have not been accountable. That must change.

Rebuild independent journalism as the antidote to tyranny

For facts to stand a chance the amplification of disinformation by tech platforms must end. But this alone is not enough. To hold power to account and protect journalists, there must be unparalleled investment in a truly independent media.

Luminate and BBC Media Action helped to create the International Fund for Public Interest Media (IFPIM), which is seeking to increase support to independent media to enable their development, sustainability and independence - especially in resource-poor and fragile settings.

The Fund, which is co-chaired by Rappler CEO and Nobel Laureate Maria Ressa, is now able to accelerate its efforts to raise a billion dollars from governments, private sector companies, development agencies, and philanthropies.

At Luminate our vision is for a world where the information that shapes people’s lives is more accurate, independent, and inclusive of everyone’s viewpoints. Today’s Big Tech monopolies were not built to do this and appear unwilling to change. That’s why we urgently need to mobilise to ensure there is better regulation to hold them accountable and to create the space for technology built in service of the greater public good.

Along with our partners, Luminate will work to help ensure that this 10-point action plan gathers broader public support to tackle the business model of Big Tech. 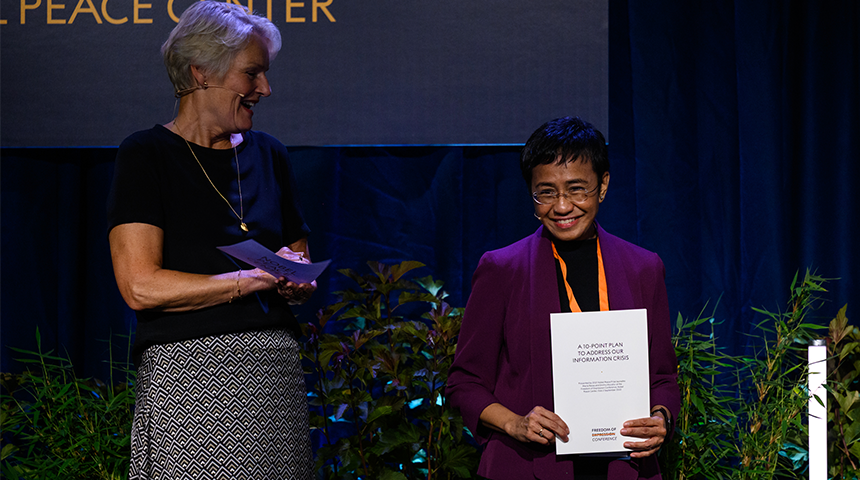