By Nishant Lalwani and James Deane

The theme of this year’s World Press Freedom Conference starting on December 9 is “Journalism without fear or favour.”  However, the grim reality of the COVID-19 crisis means that many countries around the world may be facing a future with no independent journalism at all, precisely at a time when access to reliable information can be a matter of life and death.

The pandemic has been called a media extinction event. It has led to devastating losses for independent media organisations, of US$30bn in 2020 alone, while laying bare the problems faced by traditional media business models.  Just as audiences have surged, financial revenues have plummeted. Advertising – already moving rapidly to online platforms – has been further hit as the economic crisis has bitten.

The grim reality of the COVID-19 crisis means that many countries around the world may be facing a future with no independent journalism at all, precisely at a time when access to reliable information can be a matter of life and death.

Journalism was already facing a perfect storm before the crisis; COVID-19 just swept in as a Category 5 Hurricane on top of it.  Many institutions especially in low income countries are unable to survive.  Those that are left will struggle to fulfil their societal purpose. A chronic crisis has, in the space of a few months, become acute.

Last month, Columbia University and the International Center for Journalists published the findings of a survey of more than 1,400 media respondents from 125 countries.  The Journalism and the Pandemic Project found that more than 40 per cent of respondents (from those with knowledge of their organisations’ finances) reported revenue down by more than half, with almost one fifth (17%) saying it was down by more than 75 per cent.  The number one priority identified was to secure funding to survive. 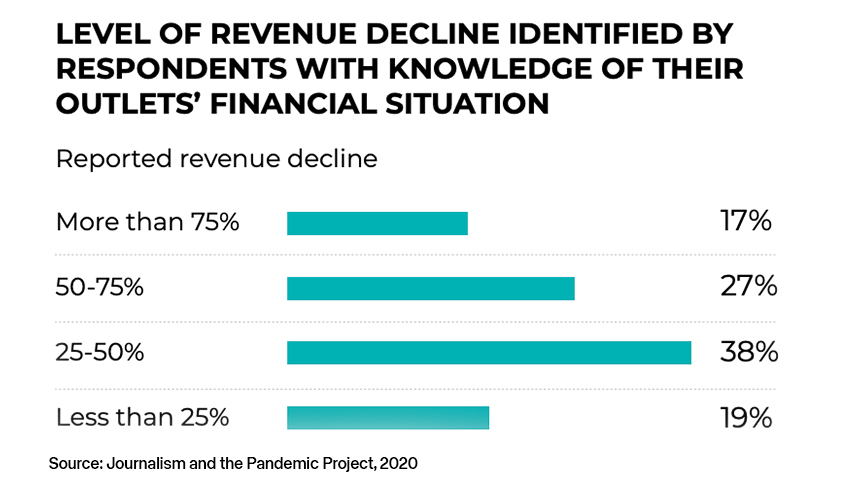 Another global survey by the Reuters Institute for the Study of Journalism, “Few Winners, Many Losers”, found that more than a third of survey respondents reported drops in revenue of 30 per cent or more.  More than 80 per cent said their most critical need was funding.

These often catastrophic reductions in revenue were despite both surveys finding that audience levels had risen during the pandemic which has shone a bright spotlight on the human costs of misinformation and the extraordinary societal value of trustworthy information.

There are only three available policy responses to this crisis.  One is to conclude that independent, fact-based journalism is not sufficiently important to democratic societies to save.  The second is to ignore the evidence, pretend the crisis is not as bad as is claimed and hope that the problem will go away.  The third is to mount a meaningful, organised response.

Is journalism important enough to devote scarce resources to and more important than other spending priorities?  We leave policy makers to draw their own conclusions on its value in countering the malicious spread of misinformation, reducing corruption and ensuring space for civil and democratic norms to thrive. We have yet to encounter any democratic policymaker who doesn’t consider these functions in society indispensable.  Many are arguing, as Nobel Prize winner Joseph Stiglitz did recently, that information is a public good and as a public good it requires public support.

At this World Press Freedom Conference, the conversation needs to take a decisive step forward.  It is no longer a question of whether a truly meaningful response needs to be mounted to the crisis facing independent public interest journalism; it is how and what that response should look like.

At this World Press Freedom Conference, the conversation needs to take a decisive step forward.  It is no longer a question of whether a truly meaningful response needs to be mounted to the crisis facing independent public interest journalism; it is how and what that response should look like.

We are supportive of two practical and tangible responses:

The first is the Information and Democracy Forum established by Reporters without Borders, one of the world’s leading media freedom organisations. It brings together leading democratically minded governments, media development and media freedom organisations and academic and other stakeholders to map out clear policy pathways to transform our currently dysfunctional information and communication systems.  A working group on media sustainability is particularly welcome.

The second is to establish an International Fund for Public Interest Media.  The fund would be specifically focused on supporting independent media in low income countries and be funded by increasing the extremely low allocations from official development donors: currently around 0.3 per cent of international development assistance. Increasing this to 1 per cent would ensure US$1bn of funding worldwide. It would help to guarantee the survival of the very best media outlets and to support the evolution of new, sustainable business models. A detailed feasibility study for the Fund has been developed, a founding secretariat has already been established and a number of donors are already considering supporting it.

We call on international donors and policy makers to recognise the urgency of this challenge and mount a meaningful international response.

Alongside governments, philanthropies and other donors, the Big Technology companies need to step up and play their role.  While some have started to provide funding to support the media outlets they rely on for the huge bulk of their content, it is only a tiny drop in the ocean in comparison to the advertising revenues they have drawn away from public interest media.  The International Fund provides these megaliths of the information economy with an opportunity to secure the future of public interest journalism. In the process, they would be protecting the very content they rely on to serve their audiences, and doing so in an equitable, impartial way, clearly working towards the public good rather than their own commercial interests.

The scale and character of the crisis confronting independent media around the world is now coming into focus.  Earlier concerns that the pandemic might prove to be an existential threat to media are proving well founded.  If this is allowed to happen, the democratic and development costs will be immeasurable. We call on international donors and policy makers to recognise the urgency of this challenge and mount a meaningful international response.

Nishant Lalwani is a managing director at Luminate, a global philanthropic organisation focused on empowering people and institutions to work together to build just and fair societies. He will be speaking at the World Press Freedom Conference on 10 December.

James Deane is head of policy at BBC Media Action, the BBC's international media support charity, where he has led the development of a feasibility study for an International Fund for Public Interest Media.